I digitized Hans Kopp, Trans K-B and Shakarchi Trading AG of Zurich c.1981-1989 (3rd version) as the third networks based on a scan from the global networks catalogue. While doing this, I noticed a sixth type of edge which is dashed and bidirectional. I assume this means a financial association and introduced a new edge type in the ontology for node and edge types.

Here is the scan that I used: 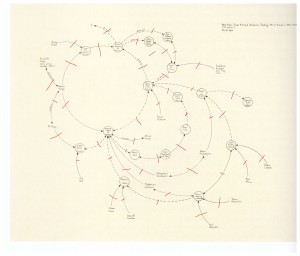 The new network overlaps with the others with the nodes Saddam Hussein and the Government of Iraq. I had to cheat a bit, since in the Hans Kopp network Lombardi uses “Saddam Hussein pres of Iraq” and “Govt of Iraq” instead of the single name and “Govt Iraq”. With this, “cast” on the services page is more populated. A next step now is to visualize a joint network composed from all three that we have so far.